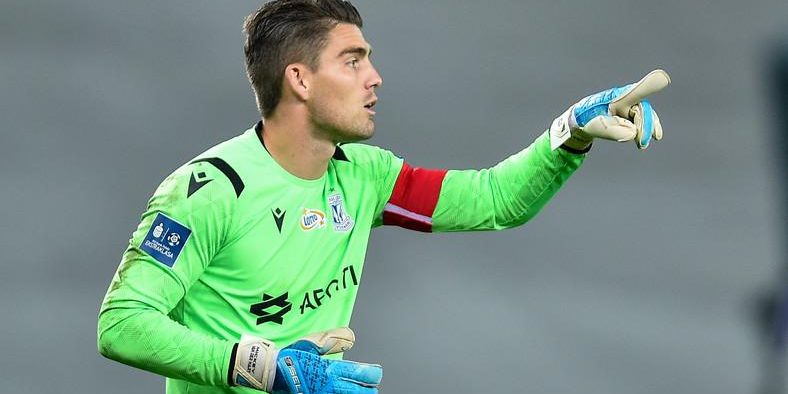 Mickey van der Hart: the habits of a professional goalkeeper

How does Lech Poznan-goalkeeper Mickey van der Hart prepare himself for games? What are the important habits of a professional goalkeeper? And what is the role of a goalkeeper in the tactical aspect of the game? To know more about his routine we sat down with him to discuss how he manages his own development.

“To start with, as a goalkeeper your tactical involvement is highly influenced by the style of play of the team. Playing attacking football or defending football demands big differences in the style that you play with as a goalkeeper”, Mickey mentions. “For example, if you are on goal with a team that defends close to your goal, that requires a completely different style of goalkeeping compared to a team that puts a lot of pressure on the opponent and tries to win the ball high on the pitch. In general, I play for teams that have a more attacking style. So that means that you play further from your goal. I will often stand far from my goal around the penalty box line.”

Tactics for a goalkeeper

When defining what tactics are for a goalkeeper Mickey said that almost everything you do with your feet can be considered tactical and everything that you do with your hands is technical, but there are some exceptions. “When defending a cross there are some tactical aspects that you take into consideration. You make certain rules with defenders who, for example, cover the first zone at the post, so that I automatically take the second post a bit more. These rules are based on our team tactics and also on the analysis we did on our opponent. But most of the time I only focus on my position, and not on the position of my defenders and that could be more considered as technique instead of tactics.”

Getting comfortable with the ball at my feet

Training as a goalkeeper is clearly something different than the way the rest of the team trains. The role of a goalkeeper coach is something that influences the development, but who had the most influence on the development of Mickey van der Hart? He mentioned: “ The trainers with the most influence must be the trainers during my time at Ajax. Rene Stam in combination with Carlo l’Ami were those trainers. They really developed me into the kind of keeper I am today. They had a great impact on my skills with the ball at my feet. The focus was on getting comfortable with the ball at my feet and my passing game. They really helped me with improving the way I should position myself, like in situations that a striker puts pressure on me. Or recognizing the situations when I need to position myself on the side where the ball is, or on the other side of the field to create space. They showed me many different exercises in training where I could recognize the same situation in a slightly different way. The idea was always to play with your position on the pitch and make sure that you create as much time as possible on the ball to give a good follow-up, so that can be a pass short, a long pass. This is where we’ve paid a lot of attention to during my time at Ajax.

After his time at Ajax he moved from Go Ahead Eagles and PEC Zwolle to the Polish competition. Now playing for Lech Poznan they prepare for matches with videos of their next opponent. Analysing crucial situatons is important to make sure that he and his defenders know what to do in those moments. “We get to see clips of what the opponent did in previous matches. Who are the freekick takers? What are they doing in general? When they run towards the goal, are they looking for the first or second post? I always try to paint a picture of what I can expect in that match. For example, I get to see penalty takers in advance. I then look at how many of his last penalties he scored and where he shot them. Where did he miss? But during the game I still rely on my instincts. So I take in all the information, only at the time of the match, my instincts are leading.”

Since 2019 the FIFA changed the goal-kick rules, it is now possible to pass to a teammate inside the penalty box. This influences the way how goalkeepers can start the build-up of an attack. According to Mickey, this is a great rule: “Yes, that makes it easier for me, of course, I am happy with this. This is because opponents are not allowed to be in the penalty box so you have more time to play football from the back. This makes building up an attack easier. You can now play with space more and find out what works better. I am very comfortable on the ball myself. So if the defenders have more space to receive the ball, it is more difficult for the opponent to put pressure. So for me, that is a big plus.”

The mental aspect of being a professional goalkeeper is something that is really important for Mickey. Having confidence has a huge impact on the way a goalkeeper performs because making a mistake as a goalkeeper has a big impact on the score. This is why Mickey works with a mental coach for some years now. He said: “I used to have a hard time dealing with disappointments and dealing with mistakes. That is why I have been working with a mental coach for years. Now I just know it is a waste of energy to think too much about something bad that happened during a game. Now I just know it was a mistake and that I have to move on again. I can think about what happened for a long time, but it will not change anything. So just try to continue, although this is easier said than done. That is where a mental coach helps me.

To become better it is necessary to evaluate your performance, so that is what Mickey does.” I always try to take out my emotions and stay objective when I evaluate my game. Sometimes you lose 3-0 and let go of a ball, but this does not immediately mean that you have had a bad game. I think that it is very important to look at your performance that way. A good characteristic in our profession is that you are self-critical. So you are not satisfied too quickly. It can always be better. I always try to look for points that can be improved. It never ends. I used to have a tendency to be very concerned with things I was doing wrong, but that’s not the case anymore.”